Aglaia Konrad makes photos and videos of globalised urban spaces. She is particularly interested in worldwide urban development and pays special attention to urban programmes that have been sidelined -- projects that were never fully accepted or completed. With De Materie (The Matter or The Material), Konrad focuses on Belgium, the country where she lives. The work, proposed as a work in progress, and by its title juxtaposing architecture and Belgium (rather than fusing architecture in Belgium) looks at three Belgian sites which are very different in nature: Silvertop Torens (1970, architect Jul de Roover), highrise blocks of social housing in Antwerp; Park Atlantis (1969, Jaminin architects), seaside holiday apartments in De Haan and Huis Roelants (1962, Willy van der Meeren), a writer’s home in Sint-Maartens-Lennik.

Konrad offers a stripped-down documentary. There is no voice-off, no music, no sound. Rather, now and then, a text unrolls from bottom to top, analysing and commenting on the buildings and their respective histories and possible futures, as well as the ideologies that ‘gave them form’. Each time, a different theorist comments on the history of the building and the contemporary renovation projects, or the lack of them. The Silvertop Torens are scrutinised by Lionel Devlieger; Park Atlantis by Maarten Delbeke; Huis Roelants by Paul Robbrecht.

Konrad uses these analysts’ words to critique and dispute the buildings’ fates. The Silvertop Torens, for example, are being over-restored, whereas Park Atlantis is decaying. Image strategies are varied and adapted to the filmed structures. Often created by means of a hand-held camera, sometimes from inside a moving car, the visual ‘language’ underlines and refines the unfolding written discourse without strictly illustrating it. Both regimes (visual and linguistic) retain their autonomy.

Van der Meeren is the only important Belgian architect invoked. Park Atlantis has no architect’s name attached to it, and de Roover is not included on the country’s roster of famous designers. But authorial and strictly individualistic issues are not part of the film’s agenda; rather, the societal and ideological background of each project is critically examined. It is possible that De Materie not only represents an essay in architectural hermeneutics, but is also a first step towards a sweeping visual archaeology of 1960s Belgian architecture and urbanism. 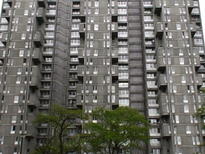 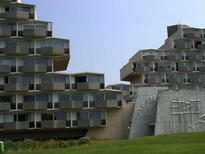 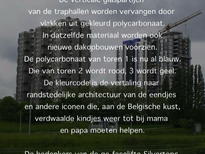 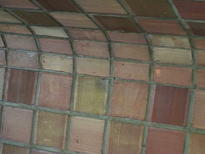