The Belgian artist Jan Vercruysse (°1948) is best known for his photographic self-portraits and his sculptures. His oeuvre has been influenced by his previous practice, namely poetry, and by the theatre, but often it enigmatically refers to masterpieces and artistic movements of the past.
In this portrait, Jef Cornelis, off-screen, interviews Vercruysse about the role of the artist and how art relates to the public. According to Vercruysse, the artists are the first public and the first to reflect on their own works of art in the process of making them. Then the public arrives, but “the spectator is already included in art, in every idea about art.”
Vercruysse considers himself to be “the last of the Flemish Primitives”. He goes on to discuss the rational sensitivity of the artist as a deliberately chosen destiny, and the compelling inner attitude that he describes as “aloofness”. In his view, art should not try to point out the truth, but rather circle around it, create gaps and map out alternative paths. To a certain extent, this is the reason why art differs from philosophy: the latter is looking for answers to open questions, while art doesn’t have to look for an answer. Art is like a trajectory that is not aiming at direct communication, but instead is determined by certain ways of masking. But what is a mask and what isn’t? During the interview, entirely shot in black-and-white, images of the conversation alternate with illustrations of paintings, sculptures and pictures by Vercruysse. Part of the series Verwant (Related). 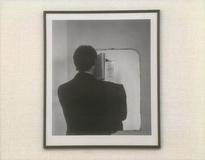 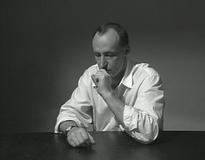 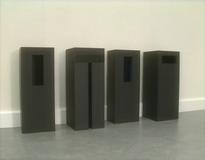