ADAM OF EVA IN HET PARADIJS

The film ’Adam of Eva in het Paradijs’ is a combination of computer animation and video material set to music by Mauro Pawlowski. The images were made during a performance with a (participating) audience in an environment which reminds of a living room. Death, rebirth and adoration are the subjects of this dark performance, brought by Dennis Denijs and accompanied by Pawlowski and his guitar. The effect overkill and chaotic editing – images shifting over and through one another - insure a video clip-like and particularly hypnotic atmosphere.

"On the incestuous gesture of the hero as an androgynous larva, craving a return to our mum by sad penetration, a casual Dance of Death performed in a twilit room, a calm plain alike, the worship kept silent, drowned out by masked gossipers, ashamed of the song of the caressing black, old electric carnival which once provoked silence, until the tourist pleases himself into a skin of hiss, in mono." (Mauro Pawlowski) 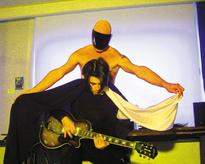 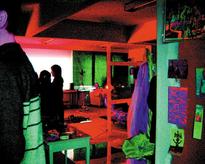 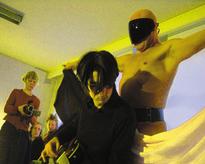