The robot in 'Le Robot’ is as a matter of fact a broken spring from the Nysts’ bed. Here it appears as a giant that a hand attempts to flatten, but ends up releasing. As the “robot” breaks free, we hear a bird singing. 'Le Robot’ is one of Jacques-Louis Nyst’s earlier experiences with the medium. If we distinguish two periods in the Nysts’ video work (each corresponding to a different generation, that of the plasticist videomakers of the 1970’s and that of the video storytellers of the 1980’s), this short video is clearly characteristic of the first, a time when Nyst’s plastic work was concerned with the poetical reading of everyday objects, and his video experiences followed the very same path. It is almost as if he used the screen as a canvas where all sorts of objects could be placed and played with: from coffee pots and eggs to dolls and plastic bags. Nyst confronts these objects with the ways in which we represent them. The common and the banal are transformed into pure poetry. Nyst’s fake innocence, poetical humor and logical delirium are the result of associations, metaphors, displacements, connections, gaps and puns. 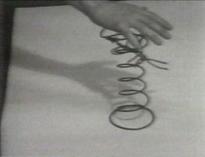