In the heart of the milky way, on a starry planet, there are two houses each with a purpose. The first is a glassy pyramid which enables one to see more clearly. The second is a cottage within whose walls one’s imagination can run beyond the limits of the eye. That very day, Theresa chose the path in between the two houses. Against this background, pencil poised Theresa tells all and nothing. She relates her desire and memories. The maze of spoken words leads her toencounter characters emerging from an unknown sky. Like a subliminal image, the triangular shape of a pyramid stands out against the horizon of images and words. This vision would not seem to have any influence over the story’s progression. Yet, at the end of her account, Theresa begins to question the value of what she has said. She feels that some important element has escaped her grasp. The element, the key that would free the meaning of her thoughts. "As if there were pyramids" she would say. 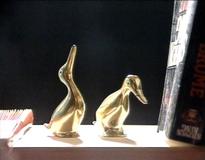