"’Gamelan’ means for Philip Corner more than the name for Indonesian orchestras. The composer uses the word the way, apart from Europe, someone might say ’symphony’. A basis of making music, adding a few wonderful ideas from the Orient: a precise relation between the scale of time and that of musical space; a simple formal concept, expressed directly through sensual attractiveness; some freedom, or mystery, added to the precision. ’Gamelan’ is the name of the first piece. In 1975 at Livingston College where Barbara Banary, who had just constructed the earliest instruments for Son Of Lion, invited Philip Corner to compose a piece. Its opening gong stroke and long resonance has gone through several revivals over the years since, and has come to seem like a ’classic’. This piece is the link to the composer’s earlier works, particularly those of struck resonant instruments, like Metal Meditations, which are intensely focused on the immediate presence of the sounds. What is added here is counting, although counting so long a length dissolves again into the intuitive. The second track on this CD is titled ’The Barcelona Cathedral’. The composer Tom Johnson wrote about it in 1978: ’A few weeks ago I attended a rehearsal of New York’s own gamelan ensemble, Son Of Lion. One of the works I heard that evening was a new composition by Philip Corner. Corner was conducting in big slow beats that fell heavily once every few seconds. With each beat about ten mallets fell onto the metallic percussion instruments with a tremendous clang. A variety of pitches resulted, and the general effect was much like a big church bell. The piece went on for nearly half an hour, always with that same relentless beat, but with slightly different effects.’ These first two compositions, first issued on LP for Lotta Poetica, have been remastered for this CD edition that also features a previously unpublished major work entitled ’Belum’. The author wrote about it: ’There is improvisation within a structure that only reveals itself over many repetitions. The melody is quite difficult, with many syncopations and rhythmic irregularities. We have learned it well, but since no one knows exactly how each will play, there is individual freedom and group chance results. Bringing together different cultures in a new kind of harmony. ...It [the music culture of Indonesia] has added to my previous development sense of music as wonderful-sound, the sense of music as wonderful-measure. Thanks to this, I now love numbers and with no diminishing of the senses...’. 16 page booklet, color photos, graphic notations and scores are included with liner notes written by Philip Corner."
(https://www.forcedexposure.com) 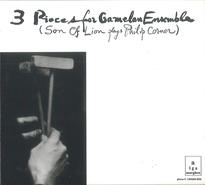