’Yesterday in City Planning’ - part of Geyer’s series of ’One-Minute Videos’ - shows the hands of a designer or architect in action – scale ruler and propelling pencil at the ready. Heightened by an audiotape of the scratching sound of industrious drawing with voices and shuffling in the background, the images suggest a hive of activity, construction, futuristic plans in the making.

The hands, however, do not draw: the pencil never touches the paper. This is emphasized in the montage; so rapid is the sequence of stills, ’Yesterday in City Planning’ almost verges on stop-motion. In a text running across the work, Geyer puts forward her own views on such subjects as man’s place in the (urban) landscape, including architecture. Combined with the images of the ‘industrious’ hands, this makes

’Yesterday in City Planning’ a short and open statement about the relationship between space, territory and the various authorities which decide, control, adjust and re-adjust these issues. 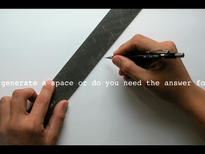 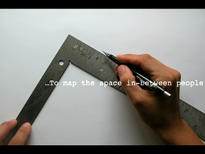 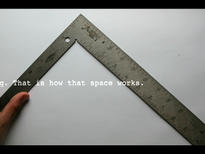