Bully Beef explores Belgian selective amnesia and its lack of empathy. The statue of General Jules Jacques, World War I hero and colonial agent in Leopold II’s Congo, is the film’s central motif. Standing in the market of Diksmuide, the statue operates as the connection between two imperialistic events: World War I and the colonisation of Congo. Bully Beef examines the differences in Belgium’s public memory between colonisation and being colonised. Although serious in subject, the animated film’s visual approach is expressive – even excessive – combining black humour with a somewhat lighter wit. Its style recalls classic Surrealist collage and Terry Gilliam’s escapades with Monty Python’s Flying Circus (1969-1974).

In 1914, Germany invaded Belgium, and Belgium’s allies came to the rescue. It took four years and 40 nations or ethnic groups – many of the latter colonised by the allied nations – to hold the Germans at bay. The memory of that trauma is kept alive in Belgium: tourism at World War I battlefields is at an all-time high. On the other hand, there is comparatively little published material that burrows into memories of that other invasion which took place just 30 years earlier. Many of the officers and generals honoured for their roles in defending Belgium during World War I had gained experience in the acquisition, control and exploitation of a piece of land 80 times the size of the motherland, the Congo Free State. Repelling the German invader with the help of its allies, Belgium continued its occupation of the Congo for another 40 years.

As a diaspora artist – an African living in Europe, a South African living in Belgium – Wendy Morris has focused her visual work on the particularities of national narratives and on broader Eurocentric ideologies/mythologies that legitimate beliefs in a superior, moral and non-violent Europe. Within these Eurocentric mythologies there exists a hierarchy of horror that designates certain traumas to be more tragic and of greater cultural import than others. Traumas suffered by Europeans, such as the atrocity of the Holocaust, top the list, while European-induced traumas such as colonial violence are relegated to the bottom rungs of history. Morris’ animated films explore the embattled terrains of collective memory and selective amnesia which result from this hierarchising of horror. 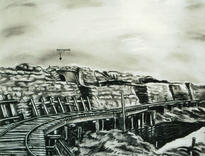 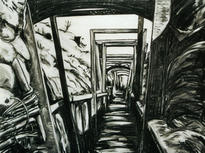