It is the year 25 in the Tsyn era. The Earth is threatened by a liquid invader and a resistance committee has sought shelter in a large basement. Terril Songe is one of its guards. Her day always begins with the 16 Faces Ritual. With her mutant friend, the strange bird of Nedea, she goes around the shelter wishing all the resistance fighters a good day. ’Le rituel des seize faces’ is one of the last videos ever made by the couple. As usual, the most common objects slide into the narration changing the course of things in a surprising way. For example, Jacques Louis tells Danièle : "Oh, look what I’ve found..." and gives her a little spoon. His gesture echoes that of God - painted by Michelangelo on the Sistine Chapel’s ceiling - reaching his hand out to Adam. Danièle touches the spoon with the tip of her finger and says "... a little bit of Eternity!". 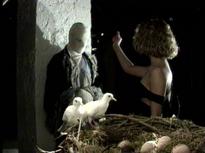 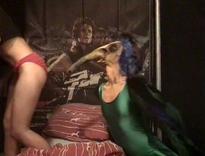