’Kasper König’s Münster Sculpture Project’ is an event held every ten years in Münster, a small city in the Rhine valley both near Cologne and Frankfurt. Münster got catapulted back in 1977, when curator König and Münster museum chief Klaus Bussmann set up a show of public art in the city. It featured nine artists, including Joseph Beuys and American Minimalists (André, Judd, Nauman and Serra), and was greeted as a seminal event. Ten years later the show was repeated, expanded this time to 63 artists, including the original group as well as students of Beuys: Stephan Balkenhol, Lothar Baumgarten, Katharina Fritsch, Isa Genzken and Reinhard Mucha. From the U.S. came figures of the moment: Dennis Adams, Keith Haring, Jenny Holzer and Jeff Koons. And from Arte Povera they were joined by Giovanni Anselmo, Luciano Fabro, Mario Merz and Giuseppe Penone. To many people Münster 1987 was a milestone event, marking the coming-of-age of a certain generation of German artists, as well as finally indicating the proper place of conceptual art : outside the museum. Overall, perhaps, the Münster project carries out the Futurist tenet that "the museum is the graveyard of art" and also puts the ideas of 60’s Conceptualism into reality, that is, to move out of the stasis of the museum context into real public space. In the first part of the report the camera team and the spectator are guided through the city by flaneur Christian-Philipp Muller, immediately creating a historic, local and almost physical context around the exhibition, as a collection of souvenirs. The physical dimension is further reinforced by the interventions of dancer Brygida Ochaim, who enters into a dialogue with the artworks. At the same time Cornelis never allows the illusion of television to join in, by visualizing the recording process on a regular basis. The protagonists of the programme come together in a second part, in which screenwriter Chris Dercon interviews the organizers Kasper Konig and Klaus Bussman about the relationship between art and its public. 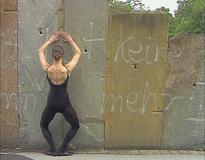 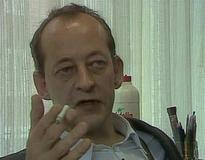 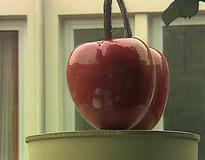