Orient Palace (Collection) was the initial production of the ongoing body of works Towards a history of the vanishing present, which have been developed in Tunisia since February 2008. It intended to preliminary thematize issues that have been further addressed in following works.

Orient Palace (Collection) researches material forms that manifest a selective appropriation of the past and its unfinished negotiations. The video focuses on the decor and architecture of several hotels on the Tunisian coast. Numerous reproductions of 19th Century Orientalist paintings made by European artists (English, French, German, Italian, Spanish, Swiss, etc) adorn the interiors. This profuse gallery constitutes a wide-ranging Orientalist collection that keeps the Western fantasy of a mythical Orient alive within the contemporary tourism industry.

The filmic investigation shows the discrepancy between an ornamented, exotic setting designed for Western tourists on one hand, and the hyper-functional architecture on the other. The parallel sonic investigation focuses on resonances that open the filmic space. It manifests the complex, industrial machinery and the invisible labour happening in backstage service rooms.

The explicit reference to 19th Century Orientalism (thus to the tradition of voyage to the Orient) and the examination of its remnants in the present seek to critically engage the series Towards a history of the vanishing present in questioning colonial and postcolonial history. The Western artists who travelled in the Maghreb in the 19th Century in search of “types” and “scenes de genre” could only begin their trips in secure zones, under military control, and later colonized. The question of the particular power structure in which these works came into being pressingly raises. The reference to Orientalist tradition was a way to preliminary thematize our own spatial mobility to the Maghreb, our possibility of movement while the mobility to the other direction, to Europe, is severely restricted - in brief to problematize the context and the conditions of realization of our work. (source: https://www.parallelhistories.org) 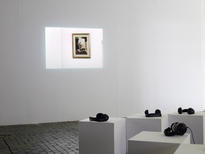