FACE OF THE EARTH

The face of the artist is filmed in extreme close-up, from his chin to the top of his head. Filling the screen, Acconci’s head comprises the theatre for a crumbly narrative about a personal past. His actions and words serve as a metaphor for the mythical American landscape; his personal memories likewise tell of a collective drama – the early days of recent American history.
Alternately humming/singing and speaking, the artist very slowly revives an incoherent story dating back to the time of the Wild West. In so doing his fingers pluck the air above his head now and then, imitating the gallop of a horse. Amongst other things Acconci goes on about a swerving journey through the pastoral prairie and a free-as-a-bird existence, a tale that starkly contrasts with the payment close-up of his face. In scanty measure the artist relays still more of the details, hereby spinning a story about indians, blood-brothers, a settlement, and the time when he was sheriff.
Although Acconci apparently cuts himself off from the viewer completely in ‘Face of the Earth’ – carrying-out a stream-of-consciousness monologue with closed eyes – the viewer must take an active position: it is up to him/her to spin a tale out of the dozen or so fragments. Different elements – Acconci’s position, his hastened yet hesitant manner of speaking, the fragmented nature of his thoughts, his manic, sometimes even aggressive puffing, and so forth – make one think of a psychoanalysis session, or of hypnosis. In this sense the viewer is allocated the position of psychologist/specialist; bits and pieces threaded together constitute Acconci’s personal doubts and anxieties and form an ever clearer view of his altogether unstable condition. Although the setting and the situation feel very theatrical, ‘Face of the Earth’ avoids a linear narrative construction (which is emphasised by the brusque way the film breaks-off at the end). Acconci gropes for his own identity and for the status of American mythologies, thereby employing language as a catalyst. 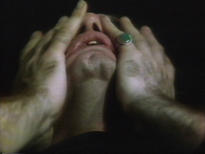