The Medea installation is made up of a large, square table with four video monitors. A single actor or actress is seen on three of the four monitors, from the waist up and frontal. The fourth monitor shows only text. The starting point is a short prose piece written by Lorand about a young woman intending to kill her two children after the end of her relationship with their father. Lorand’s own interpretation of the Medea myth is written out in four variations: one for each of the four ‘voices’, the four monitors in the installation. Here, the multiplicity of voices and role distribution do not take place at the level of the story itself, but at that of its production, interpretation and reception. A different participant in this process is speaking through each of the monitors: author, director, actress, member of the audience. The four versions of the text distinguish themselves from one another through the use of various grammatical persons and times, a means of indicating that each of the four protagonists relates differently to the drama to be produced. Medea does not show us the interpretation of a work of dramatic prose. It is not a representation, but sooner the representation of (leading up to) a representation. The actors are perhaps playing a role, but in the second degree: the actress playing an actress, the author an author… This kind of double-sidedness, whereby the viewer is intentionally kept at a distance, is a procedure that Lorand picks up again in the three shorter films, but now in a more ‘literal’ way: all three came about by way of the refilming, with video and usually shot over the shoulder, of a video or film projection. 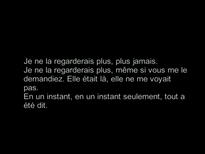 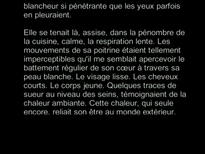 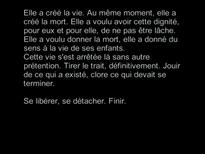