’Performing the Border’ is a video essay set in the Mexican-US border town of Ciudad Juarez, where U.S. industries assemble their electronic and digital equipment, located right across the border from El Paso, Texas. ’Performing the Border’ looks at the border as both a discursive and a material space constituted through the performance and management of gender relations. The video discusses the sexualization of the border region through labor division, prostitution, the expression of female desires in the entertainment industry, and sexual violence in the public sphere. Interviews, scripted voice-over, quoted text on the screen, scenes and sounds recorded on site, as well as found footage are combined to give an insight into the gendered conditions inscribed in the border region. La Frontera is a place of unstable identities as a result of migration to a geography characterized by a hostile desert and a border they cannot transgress. The border is considered as a discursive construction articulated through the crossing of people and the power relations of the two nations. There is the story of Concha, who learned how to avoid the border control and transport people, mainly pregnant women, to the other side, where they can give birth in a US hospital. Adolescent girls come from central Mexico to the border to start a life from scratch. The video addresses the choices they have, the dangers they face, and the fragility of their new situation caught in an ambivalent world between high technology and the lack of the most rudimentary necessities. The feminisation of international labour division makes evident that gender matters to capital. The Maquila-section in the video includes fragments of interviews conducted with human rights activist Judith, labour activist Cipriana and journalist Isabel on the condition of the women who are the producers in the global plan and on the relations between the production of technology and gender. Sex work is a major trade in this border town. Juana, a former prostitute from Torreon, gives us her perspective on the trade and the changes it has undergone during the past 10 years. There are crossovers with the Maquila women who complement their income on weekends with prostitution. On the other hand, the reversal of income pattern is obvious in the night clubs, where the entertainment is catering mainly to young women with male shows. Relationship patterns are being remapped quite drastically on the border. In the 1990s, the rapid modernisation laid the foundations for another urban phenomena: serial killings. Since 1993, close to 150 girls and young women have been raped and killed in Juarez, conforming to the same pattern. It is the biggest case of serial killing known in the world. The video brings the compulsive, repetitive character of the crimes to bear on their relationship with mass technologies (registration, identification and simulation), and looks at the entanglement between intimacy and technology in this setting. The border is presented as a metaphor for marginalisation and the artificial maintenance of subjective boundaries at a moment when the distinctions between body and machine, between reproduction and production, between female and male have become more fluid than ever. (Source: https://www.geobodies.org) 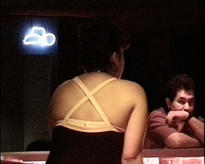 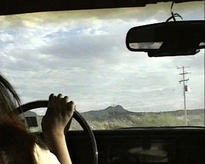 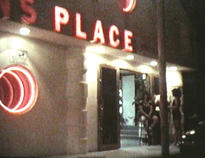 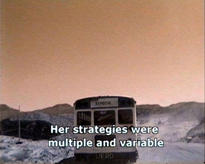 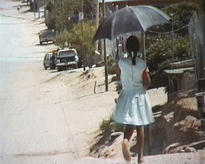