The work of the American artist James Lee Byars (1932-1997) resists any strict definition or categorisation. He was greatly influenced by his many travels, as well as by for example Zen philosophy and Noh theatre, which he discovered during the years he spent in Japan. While his oeuvre relates to conceptual, minimal and performance art, it is not limited to any of these genres. Often there is a simple idea underlying his work, which appears in a wide variety of forms, such as installations, sculptures and performances. They are made of an equally wide variety of materials, such as glass, paper, silk or gold.
In 1969, Byars conceived a work called The World Question Center, which consisted of an attempt to collect questions from some of the ‘100 most brilliant minds’ of the time. On November 28th 1968, this performance was broadcast live on BRT. The artist asked almost the same question – namely “Could you present us a question that you feel is pertinent with regard to the evolution of your own knowledge?” - to a number of intellectuals, artists and scientists. A circle of men and women wearing a special dress designed by the artist surrounded him on set. His various interlocutors were either present in the room or contacted over the phone during the broadcast.
The programme was presumably recorded simultaneously on one 2” tape and on two 1” Philips tapes (VPL 8 in. IC 1800 ft.). In 2001 one of the original 1” tapes from the collection of Herman Daled was digitised and restored by Argos and Packed - Centre of Expertise in Digital Heritage (Brussels) in collaboration with AV Works (Haarlem). (Emanuel Lorrain) 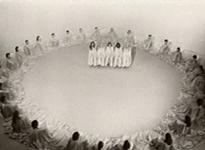