Paris’ bdv (bureau des vidéos) dedicates a new DVD collection to curatorial practices and exhibition history called Archives. The series starts with the release of two major titles by Jef Cornelis (1941) produced at the occasion of Documenta 4 (1968) and Documenta 5 (1972). Edited and introduced by the art historian, curator and director of Le Magasin (Grenoble), Yves Aupetitallot, these titles constitute unique accounts of two exhibitions which were seminal to current contemporary art practices. They present the artists and the exhibited works, the curators of each Documenta as well as the debates that animated the preparation and opening of these exhibitions.
When Documenta 4 takes place in 1968 the international art world is entangled in an authority crisis as well, as Roger Raveel indicates: ”worn threadbare”. At the time Kassel, with Arnold Bode as its artistic director, saw things differently. Documenta 4 was streaked with controversy and debate. The politicization of society in the late 1960s made itself felt in Kassel – red flags and groups of people chanting slogans meant that the opening speeches could not be held. Moreover, Documenta 4 was going through an internal generational conflict and a debate on the fragile relationship of aesthetic judgment and democratic forms of reaching a consensus. During interviews with, among others, Sol Lewitt, Joseph Beuys, Harald Szeemann, Allen Jones, Christo, Martial Raysse and Robert Rauschenberg they act the injured innocent and situate themselves on the side of the bewildered spectator. Sublime irony, since things were not that new and innocent at all.
In some ways Cornelis conceptualises a way of appropriating the event, sidestepping and questioning the definitions of exhibition makers, but also of artists, of an exhibition, of contemporary art. This is possible because Cornelis takes his own medium as a subject. He ignores and questions the authoritarian position offered to him by his medium and he provokes the spectator into judging for himself. The commentary is limited. It is put into perspective and completed with accompanying interviews. In doing so Cornelis enabled a perspective which is not clouded by mystifications and mythomaniacs. 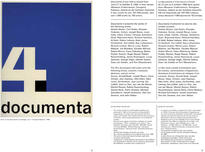 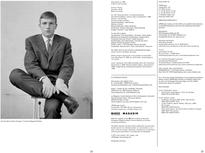