“13th Biennale de Paris 1985” by Jef Cornelis is the fourth title in our “Archives” series, which is dedicated to landmark exhibitions and curatorial practices, and provides sources and moving images to the growing field of research of curatorial studies and exhibition history.

Held at the Grande Halle de la Villette, the Biennale de Paris of 1985—the 13th edition since its creation in 1959—is among the most important exhibitions of the 1980s. Organized by an international team of curators and art critics including Georges Boudaille and Gérald Gassiot-Talabot (French), Kasper König (German), Alanna Heiss (American), and Achille Bonito Oliva (Italian), the Biennale was a platform for both established and up-and-coming artists active in the mid-1980s. Those featured here include Georg Baselitz, Daniel Buren, Richard Deacon, Keith Haring, David Hockney, Anish Kapoor, Anselm Kiefer, Bertrand Lavier, and Lawrence Weiner—most of them filmed installing their work. Mainly realized during the mounting of the exhibition and its opening, the film documents the conversations held during the preparatory phases of the event about the revival of figurative art, the role of museums and television, the individual nature of artistic experience, and reveals the stakes and debates involved in this artistic community. This inextricable combination of contextual strategies and an in-progress history of art make this DVD an invaluable document about the art world in the 1980s. Jef Cornelis mainly worked for the VRT, the Belgian national television in Flemish. He realized more than 200 films, especially on architecture, literature, and the arts. Yves Aupetitallot is an art historian, curator, and art critic, and director of Le Magasin–Centre National d’Art Contemporain, Grenoble. His illustrated essay in the booklet offers essential reference points that elucidate the context and debates of this pivotal exhibition. 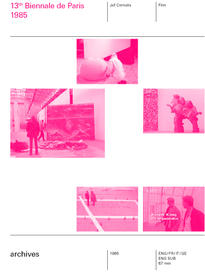