Since the early 2000s, Claude Cattelain has explored various disciplines such as performance art, painting, sculpture and video art. All his work depart from minimal performances or poetic gestures that investigate the forces of nature, the limits of an exhausted body, the notion of repetition and fragility. Cattelain then decides whether the action should be ephemeral and unarchived or whether it should be translated in another autonomous medium, as a different work of art. Dessins Répétitifs (2013–to date), for instance, is a series of drawings made by walking on a paper for an entire day, leaving a footprint with each step. Colonne inversée (2007–to date) is a performance in which the artist tries to build a column with blocks starting from the ceiling; in 186 cm Underground (2012–to date) he tries to hammer a wooden stake right down into the ground. In Beneath the Sand (2013) he buries himself at the beach of the Lido of Venice and, while breathing through a straw, he stays beneath the sand as long as possible. In his audiovisual work, too, Cattelain tries to capture the essence of the volatile. His video miniatures are flashes of amazement and fragility, at times staged or captured spontaneously. This program includes several shorts produced between 2005 and 2016 together with a selected insight from his series Vidéos hebdos, Fabrica/Brighton and Venise. 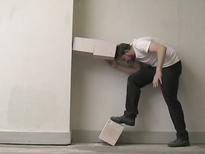 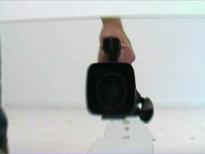 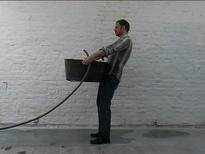 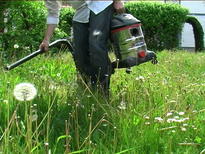 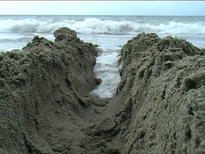 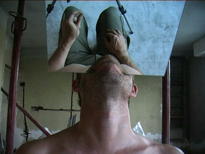