ALWAYS AND NEVER AT HOME. SELECTED WORKS BY ESTHER JOHNSON

Esther Johnson is a UK-based artist and filmmaker whose research practice explores documentary portraiture through moving image, audio and photography. Her early POINT AND SHOOT (2006) is a typical example of her style and interests: the film is a short animation in an ongoing series of formal experiments that take instruction procedures and mechanical apparatus manuals as source material. In her work, Johnson unearths extraordinary, resonant stories that may otherwise remain hidden or ignored, often focusing on the underdog in contemporary culture. For instance, CHALK TRACE (2013) tell the story of Ron Cockroft who as a child in the 1950s drew a chalk line from his school in Oldham to his home in Chadderton. The film commemorates and reanimates his graffiti journey through a now much-changed network of streets.Other recurring themes include personal histories, heritage, tradition, folklore, regeneration and precarious futures. As in Tune In (2006) in which we follow the intriguing world of amateur radio operators. Although amateur by definition, Radio HAMS are unique enthusiasts involved in a pastime that requires a rigorous licensing exam taking months of study. The project deals with the politics of space and social communication, blending documentary with lyrical imagery and audio. Finally her recent Alone Together, the Social Life of Benches (2015) illuminates the thoughts and memories of frequent users of two public spaces in London: General Gordon Square, Woolwich and St Helier Open Space, Sutton. Revolving around the micro-space of the humble bench, the emotional and experiential capacity of film is used to highlight themes such as the feeling of being in a space, the rhythm and flow of visitors to a place, and the importance of design for everyday street furniture. The film acts like a stranger who joins you on a bench to ‘watch the world go by’, and break the ice by starting a conversation with their fellow bench user.

The program is daily screened in loop from 11am to 6pm. 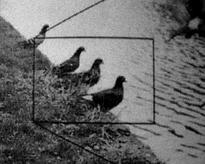