In Hebrew, descent is Yerida, now used to refer to the emigration of Jews and Israelis out of Israel. The video shows fragments from a long conversation with a very pregnant Israeli woman. She tells about her emigration from Israel to Switzerland, where her husband is from. On the one hand, she misses her native country, but on the other hand, she doesn’t. Life in Switzerland is quiet. Perhaps a little too quiet. She often thinks back on the unrelenting pressure of Israel, with terrorist attacks, death in all its guises and cynicism as a strategy for survival. Descent is a story of a land where bomb explosions are everyday fare and where people make jokes about collecting body parts. The hiatuses in this conversation set the viewer imagining, projecting and reflecting, evoking a ghost of place, history and politics.

Uriel Orlow (b. 1973, Zurich) explores the role of language, image and memory in structuring personal and collective experience.. 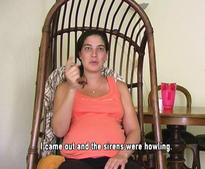