In the frame of Courtisane Festival 2016: screening followed by a DISSENT! talk with Michel Khleifi.

Michel Khleifi - Ma'loul Celebrates Its Destruction
1984, video, 30', colour.
For a long time, the original inhabitants of the Galilean village of Ma’aloul, destroyed by Israel after the 1948 War, were only allowed to visit their old village once a year, on Israel’s Day of Independence. The film follows them on that day and reveals a world of painful memories and the villagers’ profound determination to cling to their ancestral land. Village elders recall the destruction of both their property and harmonious way of life, as youngsters scramble to savour and absorb their forbidden heritage in a single, precious day. lntercut with these scenes, a teacher in a Palestinian classroom explains to his teenage students the history of Palestine, the Holocaust and the creation of Israel.

Chris Marker - Description d’un combat (Description of a Struggle)
1960, 35mm transferred to DCP, 60'.
“In the early 1960’s Chris Marker shifted his focus from France to the historical conditions of countries such as China, the Soviet Union, Israel, and Cuba. Of the corresponding films, the one chronicling everyday life in Israel became for Marker the most problematic. Filmed in the early months of 1960, Description of a Struggle examines the ‘miraculous’ survival of Israel twelve years after its founding. The film, however, prophetically warns that miracles die with those who witness them and that a second struggle was beginning. The title, with its allusion to Franz Kafka’s eponymous short story about the complex relationship between a victim and a victimizer and the narrow boundary between the two roles, anticipates Israel’s problematic future. Following the Six-Day War, waged seven years after the release of Description of a Struggle, Marker pulled the film from distribution and refused to allow its screening. When the film was awarded the Berlin 1961 Golden Bear, Marker noted with irony: ‘It is somewhat comforting to see that even though in West Berlin one can’t talk about China, nor about Siberia - and probably not about Cuba - at least for the moment, it is possible to talk about Jews’”. (Nora M. Alter)

Pier Paolo Pasolini - Sopralluoghi in Palestina per il vangelo secondo Matteo (Location Hunting in Palestine)
1965, 16mm, video, 55'.
“Pasolini’s travelogue-diary documents the filmmaker’s crushing disenchantment with the Holy Land’s scenery. Pasolini had sought a majestic “Biblical, archaic world,” but instead was “struck by the poverty and humility of this place,” and by “its smallness, its bareness, its lack of scenery.” For Pasolini, Palestinian towns and villages, such as Nazareth, are wretched, while Biblical sites, such as Mount Tabor or the Sea of Galilee, are disappointingly measly. The Jordan River seems like “a poor, humble, desperate little stream,” quite in contrast to the scenery of his native Italy but also in contrast to the painterly visualization of the Biblical Land. Pasolini also documents the modern buildings springing up around Nazareth, a landscape “contaminated by modernity.” Although Pasolini contrasts Arab archaism with Israeli modernity, this archaic exceeds his Holy Land imaginary, fully grounded in the language of orientalist travel narratives: “their faces are pagan, pre-Christian, indifferent, cheerful, animal-like... Christianity has left no trace on the local faces.”’ Pasolini concludes: “I think I have completely transformed my idea of sacred places. Rather than adapt places, I must adapt myself.” As a result, he comes to the realization that he will not be filming his adaptation of Matthew’s gospel in the Holy Land after all.” (Ella Shohat)

DISSENT! is an initiative of Courtisane, Auguste Orts and Argos, in the framework of the research project “Figures of Dissent” (KASK/Hogent). 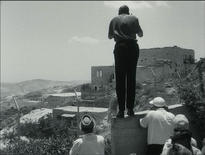