The films by Mark Lewis explore the formal interventions of mainstream as well as avant-garde cinema. Lewis’ position is somewhat ambiguous: he operates in a professional environment, similar to film industry, but at the same time his films express a criticism of cinema.
In this manner Lewis works in 35mm with a genuine film crew - his actors, extras and effects also determine his process as essential variables towards the final result. Each work by the Canadian concentrates on a single convention, at each turn a single cliché is sharply disproved. Overall the artist is building out a body of work which questions the historical evolution, or rather, the construction of a film. Recent Works confronts three recent large format video installations by Mark Lewis in a mutual dialogue. Over the last couple of years the artist has been focussing, among others, on the role of various camera movements and the development of narrative elements in time. Apart from that Lewis as well as his recent works show great interest in the (psychological) mechanism of aesthetic appreciation within the spectator. Three installations were at show at argos: North Circular (2000), Tenement Yard, Heygate Estate (2002), Children’’s Games, Heygate Estate (2002). 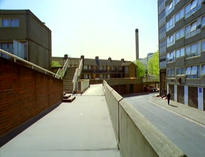