In the frame of ‘Heritage Day 2012 – Heroes’, Argos presents works out of its collection. Four videos show artistic positions facing the light of heroity. ‘Panamarenko: Portrait en son absence’ is a portrait of the Flemish art hero Panamarenko. Claudio Pazienza made this video in the absence of the artist himself. Archival images, special effects and imagery of his art present the fascinating and sometimes strange reality of one of the most well known artists of Belgium. In his video ‘Erna Lendvai-Dircksen. Flandern. Das Germanische Volksgesicht’, Gorik Lindemans guides us through the fascinating picture-book ‘Flandren. Das Germanische Volksgesicht’, with splendid photographs of Flemish farmers and landscapes from the early fourties by Erna Lendvai-Dircksen. As Lindemans makes us discover every picture and every detail, we begin to grasp the intentions of the photographer and her publisher. In 2003-2004, Kathleen Vermeir & Ronny Heiremans made a double portrait of Pierre Querut, a B movie and documentary director from the seventies. In ‘Cadavre Exquis, Brusselle part: 1’ Vermeir maps out the city of Brussels by making a tour with him of lost film houses in the former film district of Brussels. As Querut recollects on that era, he is always conscious of the proximity of the camera and he never stops commenting on Vermeir’s style of filming. Kathleen Vermeir does not only visualise the lively film industry in Brussels, roughly between 1970 and 1980, but she has also made a personal and humorous portrait of Pierre Querut. In ‘Cadavre Exquis’ Querut is shown making a 35mm film in his basement. Before the film is introduced into the projector and played, a number of actions have to be performed, like gluing together broken parts and converting it to another reel, for instance. When the film is finally projected, it turns out to be a 25-year-old promotional film for a tourist outing to Niagara Falls in the U.S. We finish with ‘Une femme entreprenante’, a film in which Sven Augustijnen points his arrows at WIELS, centre for contemporary art in Brussels, and more particularly at its key figure, Sophie Le Clercq, building promoter and the true ‘force motrice’ behind this cultural project, located on the former site of the Wielemans-Ceuppens brewery. A fierce ‘journalist’, with a highly enacted contraction of ignorance, enthusiasm and astonishment, takes the audience in tow for a further and better acquaintance with the protagonists behind the WIELS project. In a saga full of unexpected complications, a number of other actors from the political, economical and cultural world in Brussels are casually passed in review. Conventional documentary codes are undermined or subtly eroded, and as if by coincidence, a complex tangle of art, brokerage and politics slowly unravels. 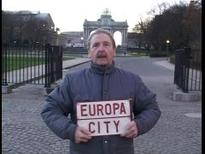 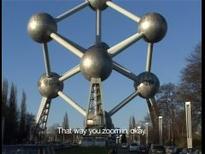 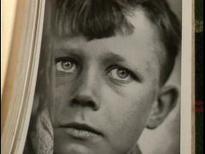 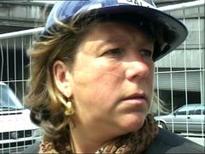