In ‘Cadavre Exquis’ Pierre Querut – a producer and B-film director from the 70s – is shown making a 35mm film in his basement. Before the film is finally introduced into the projector and played, a number of actions have to be performed, like gluing together broken parts and converting it to another reel, for instance. When the film is finally projected, it turns out to be a 25-year-old promotional film for a tourist outing to Niagara Falls in the U.S.. 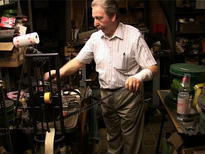 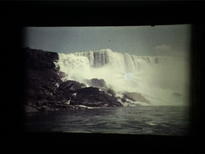