INTER V / MISIONES - A JOURNEY ACROSS THE AMERICAS

In the 1970s Joëlle de la Casinière and Michel Bonnemaison travelled across the American continent, a series of ten films being the result of their journey. Theirs is of course not an isolated example: ever since their discovery the Americas have represented a constant source of inspiration for artists of all sorts. What’s with the New World’s fascination upon Europeans? Is it its vast spaces? Exotic landscapes? Apparent opportunities? From its collection, Argos has compiled a
selection of works by Belgian (or Belgium-based) artists who just like Joëlle de la Casinière offer us through their films their particular vision on the American continent.

In Chantal Akerman’s De l’autre côté the other side in the title refers to the border between Mexico and the United States. Seen from the point of view of Mexicans who clandestinely want to conquer the
fortress that the Americans have made of their border, "The Other Side" appears as an almost inaccessible paradise. Els Opsomer’s video letter is an investigation of her personal ambivalent impressions during her stay in various Brazilian cities. De Boer’s interview with Suely Rolnik, a Brazilian psychoanalyst, becomes a triple portrait:
that of a city (Sao Paulo), a woman and a way of life. For Robert Suermondt the inhabitants of Brasilia -most of them officials- appear as small puppets placed in a scale model replica of the city. Joëlle de la Casinière will present three of the ten works conceived during her American journey : Cargadores or Cuzco’s street porters, human
beings who carry on their back a huge bundle with all the sorrows of the world; Rose de Lima, a true musical poem in radio language and the portrait of Villa El Salvador, a self-governed ’barriada’ built out of nothing, in no time, in the middle of nowhere; and Tableaux des Indes Galantes, de la Casinière’s and Bonnemaison’s cry against the ravaging of the Amazon. 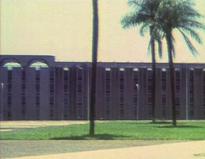 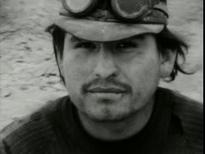