Along with the 4th edition of À Frac ouvert, an initiative intended for students and school, Transat Vidéo and Argos propose a video programme which approaches the notion of landscape. In nostalgia, Pieter Geenen reflects on the emotionally evocative and provocative qualities of the landscape. Although Greek and Turkish Cypriots had lived together until that point, the division of Cyprus into a Southern Greek and a Northern Turkish part after the invasion of Turkish troops in August 1974 forms a climax in the turbulent history of the island. Shot from a tourist observatory in Greek Nicosia, the video nostalgia shows a panoramic view of the Turkish part of Cyprus, seen from across the buffer-zone where the soundtrack has been collected..
In Fuji San, Bernard Gigounon creates a video animated with images of Mount Fuji found on the internet. Mount Fuji is the largest symmetrical object on the planet; images taken from any side can be perfectly superposed. This video rules negates the contemplative aspect in these pictures, as the Fuji monument becomes mobile and pivots.
Is the tableau vivant Celebration, Hans Op de Beeck offers the viewer a frontal view of a long, festively laid table, with a line-up of seven waiters and two chefs in immaculate white uniforms. Beside the table, to the right, two young waitresses stand with trays of glasses and appetizers. A gentle wind ruffles the clothing and the tablecloth. The staged scene of the feast looks awkward and foolish in comparison with the impressive, timeless landscape in the background.
N12°13.062’/ W 001°32.619’ Extended refers, through GPS coordinates, to a location in Africa, which is both specific and abstract. Two men wander through a deserted site in the middle of the desert. At first sight it’s an archaeological ruin. As the images reveal more of the environment, it becomes clear that the construction was built by the two of them, hewn from the surrounding stone. To Meessen this residual space reflects an inverted image of a planned, urban surrounding. Adding minimal fictitious elements what seems like an ordinary registration of an uncommon practice of city planning in Africa expands into a multidimensional structure, which should be read on a metaphorical level.

This screening is a collaboration between Argos, Transat Video and FRAC-BN. 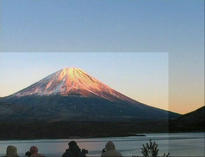 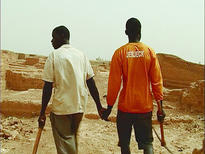