Company is a film programme in which four artists living in Brussels present their work: Sirah Foighel Brutmann and Eitan Efrat, Pieter Geenen, and Meggy Rustamova (who respectively also have exhibitions in Argos and Beursschouwburg). The screening of the films is followed by a debate. What do we mean by such concepts as collectivity and solidarity, and in what way do they impact our viewing habits?

Meggy Rustamova presents Waiting for the Secret. She departs from a photograph and reveals all its secrets by zooming in on the details. Gradually, the image comes alive.

Pieter Geenen shows an excerpt from Mirador. In this video he contrasts tourists and asylum seekers: two groups that gather in different ways in the Strait of Gibraltar. 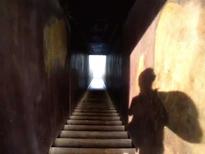