46bis looks like primitive film, like pictures from way back you’ve just found in an old, dusty trunk up the attic. You run it cautiously through the projector and discover an amazing world. This vivid movie is supported by a hallucinated tenderness of dance à la Rimbaud, performed in the big tradition of surrealism and happiness of free spirits. Two girls are sliding along the paved floor to the tones of Arabic pop music. The film image incites their movement, not vice versa.

‘Rhyme ‘Em to Death’ reconstructs the trial from Victor Hugo’s ‘Hunchback of The Notre Dame’ from a new perspective, that of a minor character – the goat. The trial of the goat, a postscript in the Hugo novel, has been extended and enlivened with the actual transcripts of 15th-century trials in which animals were persecuted as witches. Video effects alter the 16mm black & white film images as if the remnants of a lost film had been discovered and pieced together by a video freak who attempted to faithfully reconstruct a lost art. The aural world of the goat, the distorted rantings of the courtroom, and blurred sound effects combined with a musical score drive the narrative to its tragic conclusion. 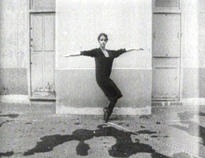 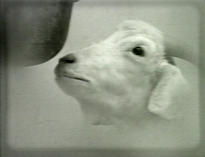 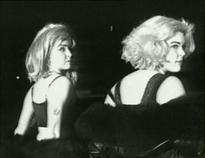