ANACHRONISM looks at the work of artists from different generations who have insistently grappled with temporality and history - both universal and personal. More specifically, their work often refutes the image of history as a neat trajectory moving smoothly forward across time. They have opted to work against time - creating works that deliberately counter linear order and received ideas of how to represent the chronologies implicit in history’s unfolding - past, present, and future.

The cinematic cut, spatial dislocation, re-enactment, appropriation, collage: these are just some of the means these artists use to construct dissonant temporalities within the same work of art. From Tobias Buche’s Aby Warburg-inspired panels of photocopies and Internet images of historical events and aesthetic forms in the 20th century to David Claerbout’s juxtaposition of a still photographic image of an American fighter plane shot down in Vietnam with a filmic backdrop of the changing light and vegetation of the same site in the present day, and from Carl Michael von Hausswolff’s documentation of a 1960s scientist’s experimental recordings of the voices of the dead to Aneta Grzeszykowska’s systematic self-effacement from every picture in her family’s photo album, these artists’ anachrony is subtle, complex, and highly idiosyncratic. In still other examples, the subjects of works in the exhibition are as diverse as the fall of Communism, the legacy of the modernist project, the repetition of the logic of war, but also marginalized figures, the recurrence of forms, or the revision of one’s past. In diverse ways and through various media, each of the works thus reveal the ultimate constructedness of all historical narratives as well as the problems inherent to the idea of an inexorably progressive and productive future. And if the possibility of changing the world according to philosopher Giorgio Agamben, lies above all in the effort to “change time,” the promise of these works is that through them we might all the better be able to read and question our past and present and thus also possibly redefine the course of the future.

Pieces by nearly 20 international contemporary artists - with several in situ new productions, including a functional cinema conceived by Tobias Putrih - are featured against the exhibition’s backdrop of a continuous screening of La Jetée, Chris Marker’s historic cinematic meditation on the paradoxes of time and memory.

An exhibition booklet with texts by Elena Filipovic, curator of the exhibition, and Daniel Rosenberg, historian of time, will be published for the occasion.

The exhibition is curated by Elena Filipovic

Anachronism is supported by: The Brussels Capital Region, agnès b. (Bruxelles). Tobias Putrih’s Functional Cinema has been made possible with the kind support of Galerie Almine Rech, Brussels. 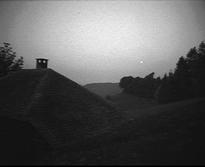