CEL CRABEELS - IN THE LINE OF WORK

In his videos, installations, photos and performances Cel Crabeels (1958, B) toys with the notion of emptiness, as a meaningful environment, opening up to a multitude of interpretations. His spatial works often stimulate the audience towards interaction, linking various levels of reality to the physical experience of the environment. In this process circumstantial elements have an important role to play. In his videos, however, background elements are systematically filtered out, until nothing remains but a minimal testing area of space and movement. Above all, he is interested in peripheral events, marginal actions which he isolates in space, situating them in the eye of the focus. Images are reduced to their essence; nevertheless they are left open for different interpretations. Above all, his work embodies a reflection on the possibilities and variety of our perception, and at the same time it explores the potential of art as an influential factor.

Cel Crabeels, Red Tape (edit)
2000, col., 12’/78’
Red tape stuck in straight lines on the floor, ceiling and walls creates an hermetically closed route through them. Two camera movements follow this line, one s an intact circuit and the other as its dismantling. This marking with tape can be seen as the equatorial contraction of an inner space.

Cel Crabeels , Leeds Tape (edit)
1999, col., 10’/66’
The people that move through Leeds seem to have a purpose, they are going somewhere. The artist chose not to. He carried out interventions at various times and places in the public space of the city. They became slightly disturbing when obstructing the natural flow of people, things and situations. The footage of this interventions is produced into a video, showing the interventions and the response they provoke. It’s part of Leeds UK, a two month project focussing itself around the question what constitutes a cultural infrastructure in the city of Leeds.

Cel Crabeels, Outplacement (edit)
2001, col., 10’/60’
Cel Crabeels explicitly tackles the issues of the area surrounding the St. Jan’s square. He visits the itinerary between the Fabiola Hall and the Sint Jan’s square almost on a daily basis, making contact with the people he meets on his way. He invites them to make a video portrait in the underground parking garage where he has built a studio for the occasion. The parking acts as a white, neutral and ’interchangeable’ space in which people are removed from their familiar environment. They are ’de-contextualised’ like migrants and refugees. He registers how the area has gained a new stimulus through the refurbishments of the square, but also how part of its memory has been lost. His work is about the (im)possibility to compensate for or register this loss.

Cel Crabeels, Topologic (edit)
2001, col., 14’/15’
We see a man in a three-piece suit standing against an equally grey background. Everything exudes the pedestrian, to such an extent that it looks as if there is nothing to be seen. But then the man begins to make rather extraordinary movements and even later it becomes clear that he is attempting to take off the waistcoat without taking off his jacket. After a long struggle he eventually succeeds in doing this marvelously by applying the same agility that women come up with when they want to take of their bra without having to take of all of their clothes. An interchange takes place between male and female, and moreover also between the gesture and its mirror image when this is repeated in reverse. That turning around on itself, the works with reversals and opposites, are a typical characteristic of Crabeels’ recent work.

Cel Crabeels, Slave Unit (edit)
2003, col., 10’/42’
’Slave unit’ is a notion which indicates the status of network equipment. In photography it denotes the power of flash installations; a distinction is always made between dominant and subjected. In the video by Cel Crabeels the idea is applied to a setting with two dancers, a director, the camera, video equipment, the stage and the audience. The work constitutes a cross-over between a dance performance, a photoscope and a video installation. A man and a woman photograph each other in turns, precisely when the camera’s ‘slave unit’ flashes. The photographer/ hunter turns into a model/ slave and vice versa. Simultaneously the image literally turns around as well, building on the principle of reversibility. On various levels the work comments the individual in his mediatized environment.

Cel Crabeels, Song, Lied, Chanson
2003, col., 12’
The video shows an old lady in a home for the elderly. She sings the story of her own life, in improvised, rhyming phrases. Echoes from another age, language mosaics from an animated past receive an anachronous echo through added electronic sound collages, as a collision of time, memory and sound. The music is by Ederen Tatio/ Stefaan Vinckevleugel. 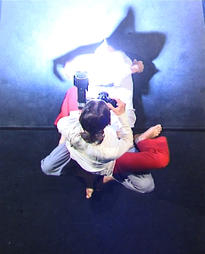 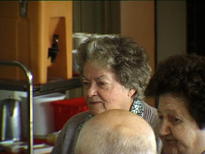 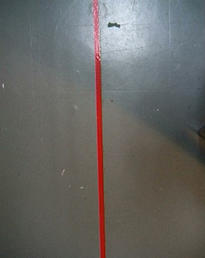 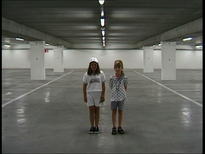