"After his studies Jan François spent a considerable amount of time working in the domains of archaeology and art restoration and he also made sets for theatrical and opera productions, before focussing from 1995 onwards on several forms of visual arts. He calls his working methods predominantly architectural, in thinking patterns, design and composition. From 1997 he creates videos and performances in which he explores body and mind. Fed by a number of supplementary studies around audiovisual language, he currently produces mainly video work, including a series of 'suites', set up around specific themes, media or people. His work has been shown, among others, at the Jensen Gallery (Hamburg) and Espace Monchar (Brussels)." 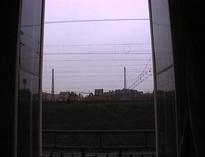