The Otolith Group (Kodwo Eshun & Anjalika Sagar) was founded in 2002. Based in London, their work engages with archival materials, with futurity and with the history of diverse provenances. Recently the Otolith Group have shown their work at the Stedelijk Museum, Amsterdam, Project Arts Centre, Dublin (2006/7), Seville Biennial, Seville, 2nd ICP Triennial of Photography and Video, New York, the Hayward Gallery, London, Fondazione Sandretto Rebaudengo, Turin, the Tate Triennial, London (2006), Homeworks II, Lebanon, Cornerhouse, Manchester (2005), and Transmediale, Berlin (2004). The Otolith Group takes its name from the structure in the inner ear that establishes our sense of gravity and orientation. In the futuristic video Otolith, long-term space travel has led to the mutation of the otolith in human beings. As a result, by the twenty-second century the human race is no longer able to survive on earth and must live in zero-gravity space stations. Dr. Usha Adebaran Sagar—the future descendent of Otolith Group member Anjalika Sagar—is a paleo-anthropologist researching life on an earth that she can experience only through media archives. Her voice over narrative accompanies footage of mushroom clouds, anti-Iraq War protests in London, scientific exchange missions between newly independent socialist countries, family gatherings, and a zero-gravity environment. A kind of post-colonial science-fiction film, Otolith imagines the global future, while at the same time reminding us of the stunted trajectories of the Third World social movements and utopian experiments that once linked the people of Africa, Asia, and Eastern Europe. Otolith’s apocalyptic vision stems not only from its evocation of geopolitical and environmental threats, but also from the general collapse of that earlier utopian optimism. 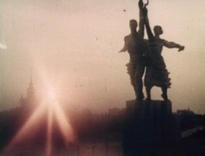 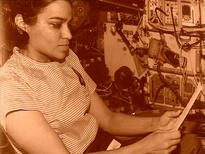 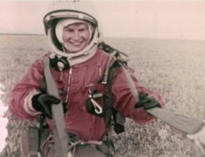