Dora García studied Fine Arts at the University of Salamanca (Spain) and at the Rijksakademie in Amsterdam (The Netherlands). Her work comprises drawings, photography, installations, performance, video, sound and net.art. Interested in the creation of situations or contexts that serve to alter the traditional relationship between artist, artwork and spectator, Dora García has found a place for herself in countless collections and museums (among them the Henry Art Foundation in Seattle, the MACBA in Barcelona or the Paul Andriesse in Amsterdam) and her video work has been shown, among other places, at Rotterdam’s International Film Festival, the Museo Nacional Reina Sofía (Madrid) and De Brakke Grond (Amsterdam).

García is mainly interested in the continuously evolving laws of human existence, with recurring themes like social conditioning and productive contradictions. Her most ambitious set-up, the long-term project Inserts in Real Time, consisted of a series of ten performances, put on by actors according to her instructions and in ‘real time’. These performances were presented at different festivals and exhibitions throughout the year 2001, each of them having their own time dimension, from several minutes (The Locked Room) to months on end (The Black Veil) or even everlasting. This is what she wrote on the subject: "The work evolves in terms of perception. I try to create perceptive situations which are nearly squeaking. [...] Squeaking: literally squeaking (a disturbing and oppressing song, a blinding light, and a stabbing colour) and also squeaking like deviations from one’s reason, from habitualness, from logicalness; exaggerated obsessive or useless situations. They squeak: they do not circulate freely." During the performance of The Glass Wall, one of the projects that was recorded on video as well, two people are permanently linked to an electronic device, only allowing them to pass on instructions to each other. The spectator can only see one of the performers. He is left in the dark about the reasons behind their behaviour or the effects of their words. The totality of the performance is kept fragmentary to everybody, even to the actors themselves: they do not know in what situation the other finds himself, and they can never be sure that their instructions are actually carried out.

The work of Dora García plays on the notions of absence and invisibility: building and contemplating emptiness, arising like an obstacle between the spectator and the image, the reader and the text – an imaginary niche, which can only be reconstructed or imagined with the help of the memory or the imagination. The performances and videos, mostly drawn from literary sources, imply a mental compromise, a concept which results from subtraction rather than addition. The video installation Lifetime Soundtrack (1997) shows nothing but a static image, summing up all the various components of a soundtrack. The accompanying music can be categorized according to the very own images we make up to go with them: recollections from our own lives or those of others, from books or films. “I believe all lives are frighteningly similar, and consist of these chapters: Intro / Action / Alarm / Voice / Silence / Memory: sad & beautiful / Prosecution / redemption / End”, García puts forward, in a comment on the illusion of the narrative structure of (ideal) life.

García creates perceptive situations growing rank between suggestion and illusion, and deluding with images compulsively tantalising the imagination. For the Two Mirrors project (2000) two mirrors were set up in a gallery space. The first one was a video projection functioning as a visual mirror of the environment, with two people in the image. Additionally the sound of the video and the real-time sound were reflected together. Reality and what was represented were therefore intermingled and the spectator considered an environment where he should be, though he really isn’t. The work is not about impossibility, it’s about expectations and how they change. García insinuates that the environment or the situation should be perceived as something different, as something which is a reality elsewhere, in a place where you don’t exist yourself. 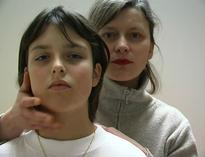 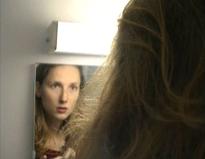