Famously described by composer Edgar Varese as "the Jeanne d'Arc of new music," Charlotte Moorman was a central figure of the New York avant garde of the 1960s and '70s. Both as a performer of new music and an organizer of exhibitions, she became one of the iconic figures of the period. In 1963 Moorman established the annual New York Avant Garde Festival, which she ran until 1982. It was at the second of these, in 1964, that she met and first collaborated with Nam June Paik, and their partnership was to last until Moorman's death in 1991. Paik created some of his best-known pieces for her, including TV Bra for Living Sculpture (1969) and TV-Cello (1971), and she was featured in many of his classic performances and videotapes, including Global Groove (1973).

Mainstream notoriety came to Moorman in 1967, when she was convicted on a charge of indecent exposure during a performance of Paik's Opera Sextronique. Ironically, this controversy led to Moorman becoming a guest on TV talk shows, giving her a place in the public's consciousness as the "Topless Cellist." Though her performances were marked by a playful delight in the absurd, this was framed at all times by a high seriousness in her approach to her music. No matter what the circumstances, she would play in the appropriate concert gown, even when hanging from a trapeze or suspended by balloons.

Charlotte Moorman was born in 1933 in Little Rock, Arkansas, and died in 1991. She studied classical cello at Julliard and was for several years a member of American Symphony Orchestra under Leopold Stokowski. In addition to her work with Paik, during her career Moorman collaborated with or performed works for Joseph Beuys, Jim McWilliams, Otto Piene, John Cage, and Yoko Ono. 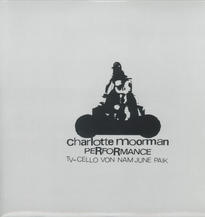 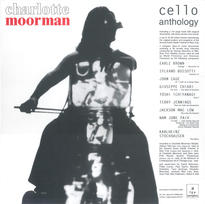