David Behrman has been active as a composer and artist since the 1960s. Over the years he has made sound and multimedia installations for gallery spaces as well as musical compositions for performance in concerts. Most of his pieces feature flexible structures and the use of technology in personal ways; the compositions usually rely on interactive real-time relationships with imaginative performers.

Long Throw, Unforeseen Events, My Dear Siegfried, Leapday Night, QSRL, On the Other Ocean, Interspecies Smalltalk, Homemade Synthesizer Music with Sliding Pitches, Figure in a Clearing, Protests 1917—2004, and Useful Information are among Behrman's works for soloists and small ensembles. Recordings of his works are published by XI, Pogus and Lovely Music. Among the artists who have performed his music are Joan La Barbara, Eric Barsness, Thomas Buckner, Rhys Chatham, Jon Gibson, Conrad Harris, Barbara Held, Takehisa Kosugi, Ben Neill, Maggi Payne, Ralph Samuelson, Kazue Sawaii, "Blue" Gene Tyranny and Peter Zummo. He collaborated with the Eva Sisters on performance art pieces in the early Nineteen Eighties and provided some of the music and sound design for Terri Hanlon’s video Meingue Diplomacy in 2009. His works have been presented at venues in North America, Japan and Europe, among them Sankt Peter in Cologne, Inventionen in Berlin, the CBC in Toronto, Metronom in Barcelona, Roulette, Experimental Intermedia, Interpretations, the Kitchen, the Lincoln Center Summer Festival, La Mama, the Armory in New York, and Studio 200 in Tokyo.

Behrman sound and multimedia installations have been exhibited at the Parochialkirche in Berlin, the LaSuen Art Gallery at Stanford University, the Whitney Museum, the Museum of Contemporary Art in Chicago, The Hudson River Museum, the DeCordova Museum, The Addison Gallery of American Art, Ars Electronica in Linz, La Villette Science and Technology Museum in Paris, Studio Five Beekman and other spaces. Among the installations are Cloud Music (1979), a collaboration with Robert Watts and Bob Diamond which is now in the collection of the Smithsonian American Museum in Washington; Sound Fountain (1982), a collaboration with Paul DeMarinis; A Map of the Known World and Algorithmes et Kalimba (1986-87), collaborations with George Lewis; In Thin Air (1997), Pen Light (2002) and View Finder (2002-2005).

Audio recordings of his works are on the XI, Lovely Music, Pogus, New World and WERGO labels; videos can be viewed at Roulette.org and ubu.com.

Together with Robert Ashley, Alvin Lucier and Gordon Mumma, Behrman founded the Sonic Arts Union in 1966. Sonic Arts performed extensively in North America and Europe from 1966 till 1977. Earle Brown released a recording of the Sonic Arts Union on his historical "Time Records" series in 1969. (Those recordings have been reissued recently on WERGO.)

Working at Columbia Records in the late Sixties, Behrman produced many of the the "Music of Our Time" series of new music recordings for Masterworks and Odyssey. Among them were the first recording of Terry Riley's In C and works by Robert Ashley, John Cage, Mauricio Kagel, Alvin Lucier, Richard Maxfield, Gordon Mumma, Pauline Oliveros, Henri Pousseur, Steve Reich, David Tudor, Christian Wolff and other influential composers.

Behrman began working with the Merce Cunningham Dance Company in 1967 and toured as composer/performer with the Company from 1970 through 1976 and again from time to time in more recent years. During the Seventies he assisted John Cage with several projects. Merce Cunningham commissioned him to compose music for Walkaround Time in 1968, Rebus in 1976, Pictures in 1984 and EyeSpace in 2007. Pictures, with its music, "Interspecies Smalltalk," won the Lawrence Olivier Award in 1985. It remained in the Company repertory from 1984 to 1989, and was revived in 2002. From 2004 through 2011 Behrman was a member, with Christian Wolff, John King and Stephan Moore, of the Cunningham Company's Music Committee.

He was co-director of the Center for Contemporary Music at Mills College in 1975-1980, and returned to Mills as visiting professor in 1999. He has taught also at Cal Arts, Rutgers, Bard College, Ohio State and the Technical University in Berlin. He has been a member of the Milton Avery Graduate Arts Program faculty at Bard College since 1998.

Other residencies have included the KGNM (Cologne Society for New Music), the Art Institute of Chicago, Harvestworks in New York, Stanford University in Palo Alto, Ca., and the Escola Superior de Musica de Catalunya in Barcelona.

Behrman has received grants from the NEA, NYSCA and NYFA, and residencies from the Japan-United States Friendship Commission and the D.A.A.D. (Berlin). From the Foundation for Contemporary Arts in New York he received two awards, an Artist's Award in 1995 and the John Cage Award in 2004. In 2005 he was a co-recipient, with Larry Polansky and Kristin Norderval, of the Henry Cowell Award from the American Music Center. 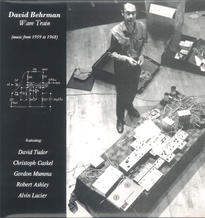