Clearly distinguishable themes and forms recur in Jan Fabre’s work, like metamorphosis or the – almost excessive – presence of the body. Certain themes, forms and moods are indistinguishable from certain techniques – think of Fabre’s blue ’Bic’ works –, just as an individual’s life and work cannot be easily separated. Likewise, it is difficult to draw clear distinctions between one work and the next, or between the disciplines within which Fabre operates. Whether a creation of visual art, video, writing, dance or as part of his ‘belongs to’ theatre work, Fabre’s art stems from one identifiable source: Homo Faber, Man the Maker.

“As, let’s call it a modest man-servant of beauty, I am interested in seeing things, not before I’ve drawn them, but before they become a theatrical play. My theatre is what my drawing will cease to be and my drawing is what my theatre will become; I live my theatre and die my drawings; I feel I am me and someone else, the eternal is present in the fertile, the drawings are not a lasting outcome, everything is preserved even though I don’t save it, a ballpoint is always at hand, and so are people around me.” (Jan Fabre, 10 March 1985)

It is impossible to isolate Fabre’s work, neither from the other works that constitute his opus (theatre, visual work, scenarios, texts, choreography), nor from his personal biography. All realisations are related to each other, in the first instance because they have to do with Fabre in some way or other, and the motiefs that he developed in his earliest works are the same strong images that keep him occupied today.

From his great-grandfather (Jean Henri Fabre: insect expert, collector, enthusiast and illustrator), Jan Fabre inherited his scientific thoroughness and a fascination for the world of the beetle. This insect, and the line which was the result of tracing its trail, constitute the starting points for Fabre’s work. In this same way, the beetle is part of his personal history. The ballpoint pen is more than just a ‘gimmick’. The blue line originates in daily experiences: jottings, scrawling, sketches, nervous twitches, and energetic action. Scribbling is part of everybody’s daily experience. Scribbles can be found in the margins of notes, on desks, calendars, documents, and notepads. Mostly they have an uncontrolled aspect. Scribbles come into existence when people are listening while they are actually in another place. They belong to some kind of attempted escape. In his large format drawings Fabre renders a new dimension to these scribbles. He pushes and scratches the lines over the surface, until they shape into thick and shiny layers, or tightly woven nets. They arise or they become deep spaces. At times they curl, they rage and sometimes they remain parallel, tight almost. It is never one singular line. Working out a small and familiar thing into something magisterial, aggressive almost, results in a particular world of experience. The drawings potentially become mirrors in which the spectator can see what he might be. Even though Fabre insists in interviews that his visual work cannot be put on a par with his stage productions, the drawing is unmistakably present in all other ‘actions’ undertaken by the artist. Not only is the ballpoint-blue space often used as a background, it is often decisive in the costumes, and the structure of the actors’ and dancers’ movements are often related to the line drawing. And in the drawings as well as in the plays the main role is played by the colour blue. Symbolically it is the colour of transience, of beginning and ending, of removal and continuation, and day and night alternate in ’the hour of blue’ , under the watchful eye of Janus, god of the new beginning, of the portal and the passage. The film Tivoli (1993) is a good illustration of this. The camera records time passing by at the ballpoint-blue Tivoli castle. Apart from the camera position everything is constantly changing: clouds are passing by, the light is changing and the colours in the image along with it. All that is left is the registration of (accelerated) time. For the time being anyway. This is because disappearance and presence constitute an inseparable unity to Fabre. Where they meet is where Fabre finds the rough core of reality. Real presence implies an acceptance of absence. This finding is repeated in every play, in every work. Not because it is a ‘theme in which anybody can find himself’, but because the repetition should provoke a metamorphosis. Life and death, and then life again, but in another shape. Here comes the beetle, creeping back into the story. He embodies the metamorphosis, in the sense that he develops from a soft and vulnerable larva into a loricate creature; but also because he completely covers and devours his victim as a group, replacing the shape of the absent body. In doing so it leaves behind a visible absence, almost as if the drawing were the trail of something that ‘had been there’.

Een ontmoeting/ Vstrecha (1997) takes place in a New York basement, in January 1997. Ilya Kabakov (who has been building his work around the fly for years) and Jan Fabre were dressed as their favourite insects. The costumes, the stumbling around of two men in the basement, their serious and impossible conversation (Kabakov in Russian and Fabre in Flemish), everything contributes to a moving performance, in which the artists uncustomarily share their soft spots with the audience. Fabre’s videotapes balance between a means of documentation, a live report of the visual and theatrical work of Fabre, and an autonomous project. There are relations to be discovered. There are developments to be followed. There are repetitions to be found out. There is a future to be traced. 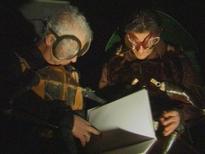 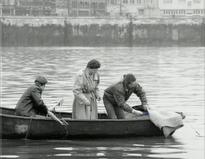 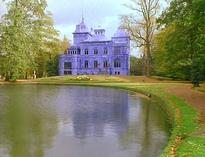 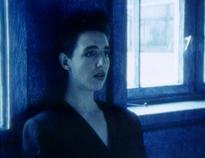