‘A Broken Rule’ is based on a performance realized by Meessen with collaborators in Burkina Faso. The video portrays African men taking turns carrying luminous text plates – often the only source of light in the image – through a nocturnal city. The activity is observed by an anonymous crowd and culminates in the moment of the completion of a sentence: "C’est beau une règle qui souffre" (“A Broken Rule Is a Sight to See”). Through the transfer of the raw recording of the intervention into slow-motion images, accompanied by a suggestive electronic soundtrack, the images are not only fictionalised but almost mythically charged. The vacant presence of the carriers, being, as it were, disembodied in the dark, their message illuminated but not initially decipherable, the dimly adumbrated crowd waiting—all translate the simple completion of the sentence into a manifestation of meaning. (Katrin Mundt) 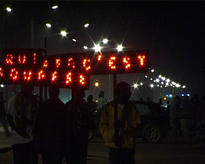 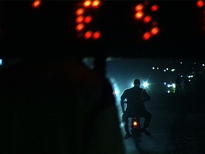 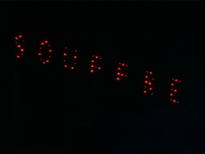