As basic ingredients: five words and a typographical phenomenon or word-thing ‘(A]S itself)’; two black and white steady cam images, and in between them one in colour, all featuring the same fixed camera image shot somewhere along the railway, from the same point of view — but with a different train passing; or so it seems.
At the very beginning of the film, and while the black screen is still ‘opening’ from the sides to the middle, there’s the word ‘HENCE’, a small black vertical band about one third to the left of the screen and a map indicating a geographic locale: Kansas. Than, alternating, ‘STILL’ and ‘AND’ (in mirror image); ‘SET’; and finally, with the image completely blank: ‘THERE’, tilted vertically at the bottom of a small black band, like a rem(a)inder of the initial blackness.
There? But where? We see a black and white image of a rail bed – the platform at the left filling about one third of the image as well – some smoking industry in the back (the word ‘SET’), a truck passing by in the distance. Again, a blackened image, then the same location – railway, far-off industry – in colour. A train passes by: everything happens in silence, almost literally underlining the graphic effect of the sun, evenly and repetitively reflected by the train windows. But the train is a Belgian train, and the initial map was only an indication of some place somewhere on earth – there – physically unlinked to this one (here, represented in the film).
Once the three-coloured (yellow-red-blue) train has disappeared, the screen becomes white – with the same strip (black now) and ‘AS’ – and the filmed image changes to black and white again. The same truck passes by and a train (the same?) enters and leaves the image, throwing similar perhaps identical, reflections: reflections as before. Hence – or so the next image says, with the word ‘HENCE’ one last time on a black band (now at two thirds distance from the left of the image) – hence, we come to at the end of the film, with ‘SET’ — and the same train passing with the band still visible. Then the strip spreads, leaving behind a black screen, which for some seconds shows the film’s title: ‘A]S’. 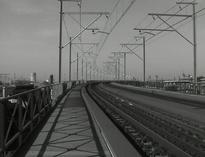 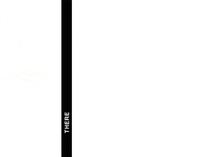 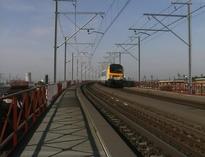