‘untitled’ is an ongoing multi-channel video installation continuing my series of projects addressing social and political realities and representations, manifestations, and enunciations, focusing on borders/nationalisms/ movements (shifts, transitions, and interstitial space/time) and subjectivity and the conditions of living between polarities of culture, geography, history, and ideology.
The installation is not modeled on the viewing of art (i.e. painting) but on an approach to research or reading, a living archive. It is flexible in its presentation with 1 - 9 distinct videotape parts looped for continuous play. Each tape is projected onto it’s own screen/image area (c. 5 feet x 7 feet/1.5m x 2m) or has an assigned monitor size. For parts 2 & appendix i, the projection screens are butted side by side on the same wall with projectors ceiling mounted. Part 1 is projected on the wall opposite these. The audio from the tapes with sound are heard with headphones while sitting on sofas or comfortable chairs. Appendix ii is shown on a medium size monitor hanging from the ceiling facing the entrance to the gallery like an airport arrival/departure display. The appendix iii monitor sits on the floor facing those leaving the space. Appendix iv is projected or shown on a large flat screen monitor in a corner. Appendix i, ii, iii and iv are silent. An atmosphere of visual collision, collaboration, contextualization, critical interference or mutual existence emanates from the tapes themselves and the viewing of the material. The screens play off of each other creating an imagistic experience of the physical/visceral and of the underlying subjectivity experienced through the body, as crisis, nation, and metaphor, or in transition and shift, and in the recounting or enunciatory nature of the interstitial site. 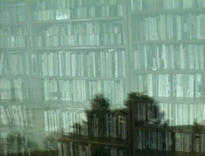 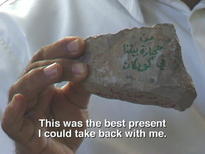