This documentary, based on a scenario by Geert Bekaert, is an attack on the alienation induced by modern architecture and town-planning. In the monotonous suburbs, life dies away and boredom rules. The city centres are depopulated and dead. The community spirit is not stressed and the individual does not find expression. Modern town planning has not yet been able to give an answer to the problem of our dying cities. But is there an answer? Part of the BRT (Belgian radio and television broadcast network) television series ’Waarover men niet spreekt’ (’What is left unspoken’).

Content:
00’00"  Leader. 00’07"  A blind man wandering across the concrete square in front of the Administrative Centre in Brussels. 00’30" Title. Illustrations taken from Alice in Wonderland. This documentary is an attack on the alienation induced by modern architecture and town-planning. 00’50" Rows of drawing-boards in an architect’s office. 01’30"  A building site. The blind man going up the stairs in the Conference Centre. 03’08"  A snippet from Tarzan’s New York Adventure (Richard Thorpe, 1942, with Johnny Weissmuller). 03’36" An architect polycopying plans. 04’15"  Advertisements and plans for the metropolis of the year 2000. Pictures of traffic in Brussels. Snippet from Tarzan. 05’15"  Festivities in a cafe with a floorshow and in a village fair (barrel organ, fairground booths, snack-bar). 06’30" Children modelling. 07’25"  Groenplaats, Antwerp : people looking at a display of books and brochures on architecture. 10’00"  Batman episode. 10’33"  Plans, models, aerial views, photographs and pictures of the futuristic city of Brazilia. 12’10"  Plans of mediaeval towns and aerial views of a star-shaped town. 13’25"  Architects make everything look alike : a snippet from Frederick Wiseman’s Basic Training. 14’08"  A doctor delivering a baby, rows of incubators, nurses bottle-feeding. 15’15" Workers manufacturing car doors. New apartment blocks. Machines making bottle-tops. Town, plans. Supermarket (exterior and rows of clothes). 18’30" Snippets from Basic Training and Batman. 19’07"  Archive pictures of American slums. 20’45"  Paris, shanty-towns built out of abandoned cars. 22’35"  Photographs of motorcyclists. The Minister of Transport warning against dangerous driving. Crossroads. Motor industry advertisements. Fairground roundabout. Batmobile. 24’55"  Wreckage being removed after a tanker exploded in Martelange (a village alongside a main road). 26’35" A coffin being prepared in a hospital. Shooting booth and dodgems at the local fair. 28’12"  A headlong rush from the town to campsites on the coast. 28’33"  Snippets from King Kong (Merian Cooper/Ernest Schoedsack, 1933) and Tarzan’s New York Adventure. 31’03"  Photographs and press cuttings on the architect Pieter Blom, responsible for the renovation of a reformed church in Monnickendam. The exterior of the church. Blom reading from a script. Aerial view of the steeple. 34’10"  Credits. 34’40"
(Source: Jef Cornelis 1964 - 1990, Espace Art Contemporain : Maison de la culture et de la Communication de Saint-Etienne, 1991) 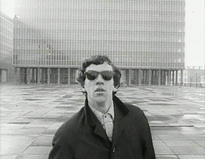 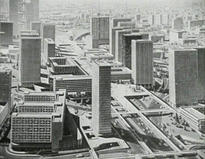 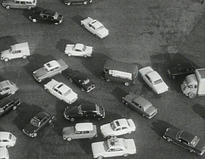