The interior of an empty office building in Zaventem’s Corporate Village, next to Brussels Airport. Human presence is only to be found outside, through the windows, in the passing cars or nearby office buildings. Using fluid camera movements, travelling as well as panning (close to 180°), Downsbrough scrutinises the environment, exploring formal and semantic relations: inside and outside, empty and inhabited, horizontal and vertical, light and dark. The geometry of the space, emphasised by the use of black and white images and by austere framing, determines that of the screen as well.

Only three words are visualised: AS, IN, AND. Between the very first image – two windows with open blinds, separated by a section of wall – and the second (the same windows, blinds shut) the word AND is shown. As if these two images form a new kind of sentence, made by incongruent material – image and language – and bound together by a word. Only towards the end of the film, just after the eighth minute, we see the film’s title: AS] IN. At the very end, the word AND is shown a second and last time, now in mirrored form, starting with the D. As in many previous works by Downsbrough, these linguistic interventions open the filmed space towards a doubled or mirrored one, which exists only mentally.

Logically, tautologically, the film is there where the film takes place – an exhibition space, some viewer’s mind – not in the filmed space. In Downsbrough’s work, the way of looking at space, at a particular space, is always invested by an interest in the social (space co-defining the social), reminding us that all ‘placement’ is at the same time ‘ordering’. But always – as here – the specificity of the medium is underlined as well, and the fact that the film is an artefact is, amongt other things, highlighted by the (often quite unexpected) intersertion of words. These interventions create both distance and a certain liberty of viewing: the gluing of words to moving images invites one to look at the film as an enigma, some riddle or even rebus (where images represent words or syllables) that has to be deciphered.

But of course, the enigmatic quality of AS] IN starts with its very title, which only appears at the end of the film. Where the film might be ‘read’ as some absurd or surreal rebus (but what – if any – words or syllables would these moving pictures represent?), the graphicl rendering of AS and IN has the inverse effect. It’s as if the words become images themselves, or even space: their typographical character is stressed, their strict semantic meaning somewhat loosened. From this point of view, with the ] working as an architectural form – closing in the AS, keeping the IN out: AS] IN –, the two words partake in the film’s represented space. This way, they multiply the film’s possible meanings or, better perhaps: they expand the possible spatial sensations the viewer may experience. (Source: Steve Tallon) 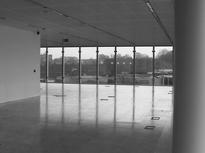 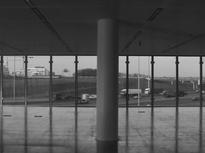 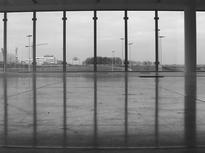