On the Italian island of Lampedusa, nighttime has gained a tragic connotation over the past several years. This pile of rocks (less than 20 km2) south of Sicily is Europe’s closest point to North Africa. nocturne (lampedusa - fort europa) captures the island’s schizophrenic, tense nocturnal atmosphere. An infrared camera monitors several spots on and around the island. The dark, abstract and suggestive landscapes show areas such as the island’s small airport, its town and harbour, refugee centre, coastal area, military zones and other well-guarded areas. Human presence is reduced to luminous dots and to the suggestive black space between them.

Further from Europe’s coast than Africa’s, Lampedus is about 100 km from Tunisia and 200 km from Sicily. Geologically, it is part of the African continent. Once inhabited by fishermen, the  isolated island is now a tourist resort. Recently, with the continuous arrival of refugees, clandestini, from Africa, Asia and the Middle East, a new chapter opened in Lampedusa’s history. In good weather and usually at night, small boats filled with asylum seekers head for Lampedusa from the shores of northern African. Every year, thousands of people risk their lives in an attempt to reach Europe by crossing the Mediterranean Sea. Some don’t survive the dangerous trip and most are intercepted before arriving on the island. The guardia costiera, or coast guard, generally bring the refugees to land at night, hiding them from tourists and residents. Since the local refugee centre is overcrowded, they get deported by plane to centres on the Italian mainland or to camps in Libya.

Similar humanitarian disasters take place around Spain’s Canary Islands and its enclaves of Ceuta and Melilla in Morocco. Notwithstanding the great number of military and police forces which are implied in Europe’s ‘defense’ against the refugees, the number of immigrants still increases at these southern borders each year. And the residents of Lampedusa? In 2006 the situation was  worse than ever before, but fewer people talk about it. It has become part of normal life. In the meantime, the fishermen of Lampedusa keep finding the corpses of drowned refugees as the island’s boat rental services continue to advertise ‘La più bella isola del mondo’.

While moving between the atmospherically evanescent and the eternal, almost frozen cinematic moment, this video creates a peculiar awareness of the course of time. Here, the viewer’s task consists of completing the blurred image, decoding the spatial ambiguities and seeing through omissions and shortenings. 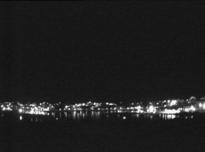