Meessen’s work is set in Chandigarh, the paragon of the modernist city planned by Le Corbusier in the 1950ies as a symbol of the new, progressive nation of India who had just emerged from its colonial past. Due to its strategic situation – close to the frontier with Pakistan and on the border between two Indian states, Punjab and the subsequently created state of Haryana - Chandigarh houses common institutions for both linguistic communities. The city’s architectural structure is that of a grid pattern, at the very centre of which the ‘Capitol’ rises: a phantasm of centralised political power, overlooking the unfinished city. Haunted by the ghosts of modernism, it leaves plenty of room for silhouettes, voices and sounds weaving together a fable cherished by the late architect about the Raven that wants to imitate the Eagle. “Dear Advisor” is a poetic address to le Corbusier and the in Chandigarh superstitiously as “advisor” disguised legislator. 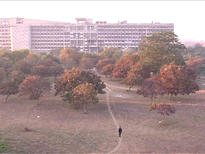 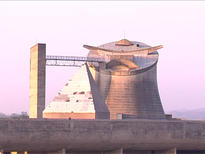