A lonely woman is approached by a shy man on a moonlit balcony. The fulfilment of their longing is hampered by the mysteries of love in a burning night. Behind the woman, the illuminated city; the ringing of a church bell, fireworks exploding. They two characters look at each other but hardly dare to touch. The woman plays nervously with her pistachio green dress, the boy touches his trousers. Little by little she slides towards him while remaining seated on the balcony, keeping it as her ‘grounding’. Lush, romantic violin-driven music sets in, ‘film’ music, referring to other such scenes, in other such films.

While the characters draw closer and closer, the fireworks in the background reach their climax. The man touches the woman’s hand, strokes her hair. The sky becomes white, blue, red. They turn their heads to watch the display: pyrotechnic drama for an artificial love? Alternatively looking at the sky and into each other’s eyes, the couple seems to relate their romance to the exploding spectacle. And indeed, after the music has reached its summit – with violins and trumpets – the fireworks subside, and so does their ‘relationship’. The man walks away from the woman, leaving her standing alone on the balcony.

The Divers might be seen as an (ironic) neo-romantic audiovisual painting or as a melodrama that reaches for the viewer’s (subconscious) cinematic and emotional memory. It also toys with the semiotics of film conventions and with romantic recipes that featuring classical ingredients such as ‘man’, ‘woman’, ‘balcony’, ‘night’, ‘city’, ‘fireworks’, ‘moon’, touching and withdrawing. 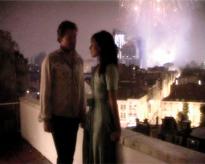