DUO TRACK : LANGUAGE AND IMAGE IN AUDIOVISUAL ART FROM FLANDERS AND THE NETHERLANDS: EIGHT STANCES

The exhibition Duo Track, organized by the Brussels center for audiovisual arts argos, constitutes the first official event at the Vlaams-Nederlands Huis, a joint project of the Flemish and Dutch governments intended to present, in Brussels, the culture of the Low Countries and to provide a forum for the debate on cultural diversity, society and politics in Europe.

In this exhibition there is specific concern for film and video installations as well as a number of related art forms that play on the connection between language and image, but also on that between discourse and perception and, in line with this, between reality and fiction.

The film and video work of visual artists has, in the past decade, been characterized internationally (and thus in Flanders and the Netherlands as well) by a distinct preference for (pseudo)documentary forms of work: usually small, everyday observations or registrations based on one concept. The organizers of this exhibition have made an explicit choice for work that goes against this approach. Duo Track aims to examine points of contact and similarities with the literary, theatrical and cinematographic traditions and to demonstrate that the hybrid audiovisual medium can be not only part of life but also part of the arts and that it is undoubtedly enriched by this interaction.

Michel Lorand’s installation Medea (2004), which is being shown for the first time on this occasion, has a pivotal function within the exhibition. On the one hand, this work deals emphatically with the theme of the creative process and does this, moreover, through a motif that can be found in various other works in the exhibition: the tragedy and the tragic. On the other hand, it illustrates how language and image can interlock on different levels. A quote from Jean-Luc Nancy’s essay Au fond des images (2003), which Lorand designates as a fundamental source of inspiration for Medea, could also have served as a motto for the exhibition as a whole: “The difference between text and image is obvious. The text offers meanings, the image forms. Each shows something: the same thing and something else. In showing, each shows itself but just as easily the other. And thus shows itself as the other: the image shows itself to the text which shows itself to the image.”

In Du Mentir-Faux (2000) Ana Torfs investigates, on the basis of the almost equally mythic female figure Joan of Arc, the tension between fact and fiction. She questions the historical texts in a doomed attempt to portray the all too physical, stubborn and yet ultimately defenceless victim of a dominant system.

Though it flirts with melodrama, Mathilde ter Heijne’s video film Mathilde, Mathilde does display, in terms of themes such as self-sacrifice and doomed love, certain similarities to the works of Torfs and Lorand. The video installation emphatically disengages language (voice-over, subtitling) and image.

Tragedy, but then in a socio-political context, is also present in Els Opsomer’s _imovie_[one]: THE AGONY OF SILENCE (2003). The work is conceived as a video letter to her friends after an eight-day visit to Palestine and Israel. Her text appears as introspective subtitling with color pictures that she photographed and then filmed.

In two installations the motif of the passageway serves as a basis for evoking an alienating atmosphere by way of an uncommon use of language. In the 16mm-film installation Machine Vision Seekers (2003) Rosa Barba makes use of a moving projector which ‘throws’ words at the wall. The text consists of short sentences from a story about characters located in an underground tunnel and surrounded by complete darkness. In Ansuya Blom’s video installation Chapter Three (2002) a camera feels its way down a hallway whose contours remain indistinct, while an off-screen voice whispers brief sentences to the viewer. Both installations explore transitional phases in which meaning is suspended for a time.

Works by Pierre Bismuth and Willem Oorebeek are the outsiders, as it were, of the exhibition. Bismuth’s installation for two video monitors, One Man Show (2003), seems to have a lighthearted quality in comparison to the other exhibited works. Through the use of split screen and mirroring effects, Bismuth manipulates a short burlesque film by Buster Keaton. Keaton’s existential surrealism is doubled, magnified. The intermittent captions become a rhetorical motif. Willem Oorebeek has created a project in situ. He intervenes at various places in the exhibition with work from the series BLACKOUT, printed matter over which a thin layer of black ink has been printed. For Duo Track he opted for kiosk posters of popular tabloids. CETTE SEMAINE (2004) is a critical comment on the omnipotence of mass media.

Running parallel to Duo Track is the project 10 BLADSPIEGELS, a poetry installation involving the voices and texts of ten Dutch and Flemish poets. The literary association Het beschrijf has produced this project centered around the visual quality of text and the poet’s voice. In connection with this, consideration is given to the international poetry website Lyrikline ( www.lyrikline.org) which also focuses on the text and the voice of the poet. Het beschrijf is the Flemish partner of this initiative. The website can be visited during the exhibition. 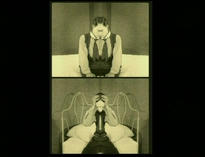 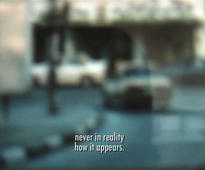 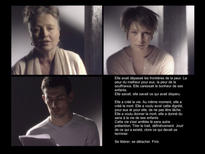