Charlemagne Palestine concert
Charlemagne Palestine, contemporary and partner in adversity of Tony Conrad and Phill Niblock, is an American composer, performer and artist who has lived in Brussels since the nineties. He is best known for his piano music, but several of his earliest works, from the second half of the sixties, are electronic compositions. He continued to compose electronic works regularly after that too. The micro-tonal vibrations and layered overtones that characterise his electronic and other compositions have in the meantime become commonplace in contemporary electronic music.

Palestine’s concerts, played in recent years mainly on a Bösendorfer piano, are unsurpassed rituals invariably accompanied by cognac, cuddly toys and other props, and in which trance is a recurring element: ‘My music is about trance... I like being in a trance.’ At the request of Argos and Sub Rosa, Charlemagne Palestine will play a unique electronic concert on 19th September 2008. After Fylkingen in Sweden and Dissonanze in Rome he will be using a laptop – Palestine style – and be accompanied by vocals. And for the very first time an actual remix of classic Palestine sounds with more recent works.

Palestine’s 1968 piece Seven Organism Study can be heard on An Anthology of Noise and Electronic Music Vol. 5 (Sub Rosa 2008).

James Whitehead concert
Since the nineties, James Whitehead – aka Jliat – has brought out about a hundred extremely radical productions in England. His first works were very much like ambient pieces with lots of drones, but his later pieces are very varied in style: guitar noise, conceptual records of silence, pieces with war sounds and pure noise.

Some people describe Whitehead as the composer who has taken the concept of anti-music the furthest. In any case, he seldom makes use of the full auditory spectrum: you either get absolute cacophony or are subjected to silence. At Argos, Whitehead will present two unpublished works each lasting 12 minutes. This is also his first concert on the continent of Europe.

Air Attack over Kabul airfield on An Anthology of Noise and Electronic Music Vol. 4 (Sub Rosa, 2006) is an excerpt from a larger work on the war in Iraq.

Guy-Marc Hinant’s DJ set
Guy-Marc Hinant is one of the key figures of the Brussels Sub Rosa label and is the compiler of the CD series An Anthology of Noise and Electronic Music (see above: Palestine and Whitehead). He has presented his DJ set A possible extension of the anthology of noise and electronic music almost everywhere in the world, but paradoxically never in Brussels. This set varies from undifferentiated sounds to the most intense sensory pieces. He draws on the five anthologies in the Sub Rosa catalogue, supplementing them with several previously unissued works. 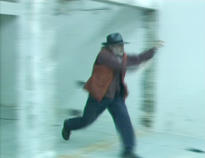