Filmmaker and critic Laura Mulvey (UK, 1941) is professor of film and media studies at Birkbeck, University of London. Her work as a critic during the 1970s, particularly her essay Visual Pleasure and Narrative Cinema (1975), is considered to be one of the main foundations of feminist film theory. During the period 1974–1982 she produced numerous theoretical films with her husband Peter Wollen, touching areas in the discourse of feminism, semiotics, psychoanalysis and left-wing politics. Later she also produced the film Disgraced Monuments (1993) together with Mark Lewis. Her recent book Death 24x a Second: Stillness and the Moving Image (2006) offers a number of reflections on the impact of new technologies on the cinema experience. Particularly with regards to the relationship between the moving and the static image, since the possibilities to decelerate the image, repeat and freeze it, creates a shift from a voyeuristic to a more fetishist relationship with the cinematographic object. 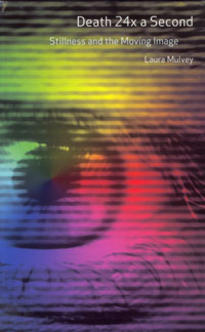