Els Opsomer created this video using amateur software iLife . It is a lyrical video letter to her friends, an introspective account of a short visit to Palestine. Pictures which were taken there are widely and deeply explored and edited, with the content of the letter as subtitles. Musing she asks herself questions about the preservation of human integrity in an area where violence is the order of the day, where human dignity is being affected day in, day out on different levels and throughout different generations. "Brutal MEMORY erasing sweetness - Only fragmented thoughts submerge day and night", she finds, in an attempt to grasp personal integrity and sensibility in the complex rag of reality. The contemplative atmosphere is enhanced by the soundtrack by Stefaan Quix.

Two Palestinian hands. In Palestine there are only four heart surgeons. Mohammed Tamim is one of them. In 2003 he came to Belgium to specialize in paediatric surgery. The second Intifada has turned Mohammed into a war surgeon. Each day he fights his own battle, trying to achieve his dream. There are times when he works in the operating room for seven days a week. Sometimes he is operating on a boy who was shot in the breast, while another boy is carried in with a similar shot wound. "But I only have two hands", the surgeon says, his voice shaking. In the film these hands symbolise the combat, putting humanity at the centre of a lagging conflict.

In a.m./p.m there are no humans beings at sight. Photos of cosmopolitan city landscapes are systematically scanned and display views of office locks, flats, dark corners, illuminated windows and skyscrapers. On the soundtrack you hear a woman’s voice. She speaks about herself and the world, about images of today, about a journey. Her monologue is a fictionalised rendering of Asselberghs’s impressions during a stay in Palestine. He consciously chose for the film to show the explosive and mediatized situation in the region by taking an absolutely minimalist audivisual approach. The distance which Asselberghs creates by using a detached female voice instead of his own, coupled with deviating from a run-of-the-mill documentary style, produces a complex approach to his feelings and ideas surrounding the Israeli-Palestinian conflict. The soundtrack is by David Shea, the voice-over by visual artist Claude Wampler and the photography by Els Opsomer. A longer version of the voice-over text is available on the book Time Suspended by Herman Asselberghs, Els Opsomer and Pieter van Bogaert (published by Square vzw, 2004).

"I had not anticipated this movie". Laurent Van Lancker went to Palestine and for 31 nights he recorded his artistic and emotional encounters on video. The 31 impulsive snapshots constitute a personal diary that maps the discovery of a different Palestine - intimate, self-reflexive and full of hidden poetry. The director gives his own intimate, personal meaning to that one, almost intangible world... Palestine.

12 August 2002 is the date which was printed on every shot in this film by the memory of the camera. On that day a huge tower which disrupted the north wing of an abandoned castle was torn down, floor by floor. The film is a record of the methodical disruption of this building by inhuman and all-powerful machines. The voice-over consists of a phone call by the author John Berger (1926), who has written numerous and radical opinion pieces in favour of the people of Palestine.

While the first Gulf War was still raging, the French film critic Serge Daney wrote about the ’typical French/Arab Art of Conversation’ and how he was no longer able to pick up this customary way of conversing with his Arab friends again. This film provides the right setting and he is in conversation with the Palestinian historian Elias Sanbar. Watching personal and mediatized images, they compare notes on the parallels and differences of their respective lives. For years the two writers have lived within walking distance from each other. Daney talks about the Parisian neighbourhood where his mother raised him. Sanbar, on the other hand, shows the only photo he has of himself as a child with his mother in the family home in Haifa. He was just one year old and peace was abruptly shattered in that very year by the events of 1948.

The Ecran d’Art series is a monthly screening of artists’ film and/or video jointly organised by argos and Cinema Arenberg, in collaboration with La Cambre Academy. 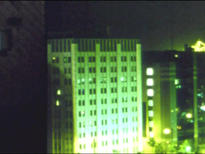