The series Silver Bliss #1: DCA Screenings presented works or thematic selections of works that have been digitized in the frame of the european project Digitize Contemporary Art (DCA), but it also aims to celebrate Argos 25th years anniversary. During the last week of the series, Performing the space couples two video works that have been performed on both ground and first floors of the Argos exhibition space. At the invitation to the group show Being in Brussels (25.11.2006 - 20.01.2007 ) curated by the former Argos artistic director Katerina Gregos, Palestine responded to the acoustics and architecture of the new Argos ground floor space during its renovation, taking advantage of the inherent echo of the space. The result is an impromptu bravura performance and sound piece bursting with ritualistic, primal energy and sheer visceral creative force. On the contrary, Wideawake is a monologue written and directed by Orla Barry and produced by Bozar on 2002. The presented version is the recording of the performance by Caroline Donnelly that took place at Argos on September 7th 2002. The video features a disoriented young woman in high heels, walking, strutting and tripping on a narrow platform, the flow of her words represents a meeting of the conscious and the unconscious mind as she is lost both physically and mentally in a series of spiralling movements and sentences. 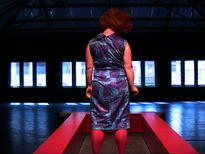 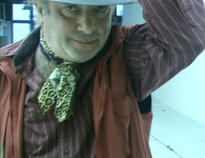 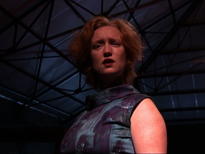 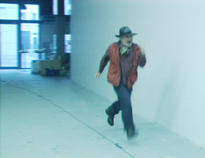