"Marie José Burki was born in Switzerland and she lives and works in Brussels. She studied literature in Genève, where she also frequented the Ecole Supérieure d’Art Visuel. Her work mainly consists of video installations, often working with several projections in a single space, entering into a relationship or a dialogue with each other. Together the various images constitute a fragmentary story. Important and recurrent components in her work are food – in groups, like a dinner – and animals, often falling back, with regards to form as well as content, on the essence. Her films are literary, sober and without effect. Burki’s work has been presented, among others, at the Kunsthalle Bern, Camden Arts Centre (London), gallery Lehmann Maupin (New York) and galerie Nelson (Paris) and out in the open along the River Hudson (New York) and the Thames (London)." (argos festival 2004 catalogue) 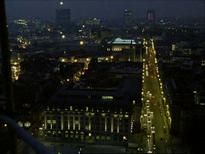 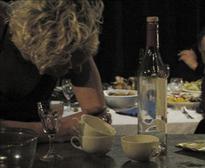